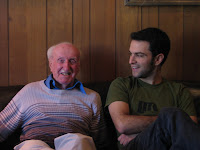 A few days ago, my sister sent me a link to a site devoted to preserving memoirs of holocaust survivors. The one that caught her attention was written by a survivor named Izak Borenstein.

I don't know if Mr. Borenstein is a relation. It apparently was not an uncommon name in Eastern Europe, along with the many variations ... Bernstein, Bornstein ... etc.

But this one was particularly interesting because of the additional coincidence that Izak Borenstein was born in Radom, a city in Poland which happens to be the home town of Bijou's father, Morris Trukenberg, who is still alive at age 96.

The part of Izak Borenstein's story that my sister noted is this:

"My brother told me that after I left Radom for Russia at the beginning of the war, the Germans had come looking for me. When they couldn't find me, they looked up another Jewish boy who lived near us who had the same name as I did-- Borenstein. We were not exactly friends, but we knew each other. The Germans came to my house looking for me, but since they could not find me, they looked him up. They took him out and shot him by the door of his house. A Borenstein is a Borenstein. Can you imagine? I do not know if I feel guilty. It is hard to talk about this. It hurts."

I don't know if Morris knew Izak Borenstein or the Borenstein that was murdered in his place. Morris' memory is now locked deep within and no longer accessible.