Note from my unwritten autobiography ...

A public defender does not choose his clients; they are assigned to him. The client, who cannot afford to choose his own, is in the same position. That’s why I thought my first job was to convince the client that whoever had made the choice for each of us wasn’t nuts.

Usually this worked out. I made sure I looked the part: well-tailored, Mont Blanc pen, leather briefcase, engraved business cards. I never introduced myself by my bureaucratic title: “Deputy Public Defender, Grade IV.” Rather, I was an attorney there to represent him or her in the matter before the court.

Usually, it got me off to a decent start. Sometimes, the resistance was stiffer. One client fingered the card, examined my name, and asked, “You a Jew?”

Anti-Semitism is not the only objection that a person in this position might have. A bit less common than: “You work with the DA?” or “The system pays you, don’t they?” or “Why can’t I have a real lawyer?”

The idea in this first encounter is to build confidence. Truth is therefore recommended.

So, I said, “Yes, I am.” My demeanor was intentionally affirmative, neither confrontational nor apologetic.

The client nodded his head and relaxed. “Good. Jews are smart.”

This client’s logic was fairly straightforward and rather unimpeachable.

I was a lawyer. I was a Jew. Jews are smart. Hence, I was a smart lawyer.


That is the sort of stereotypical nonsense I could work with.

Posted by Mortimer at 2:27 PM No comments:

CRIME IN FILMS AND LITERATURE: "THE LETTER" 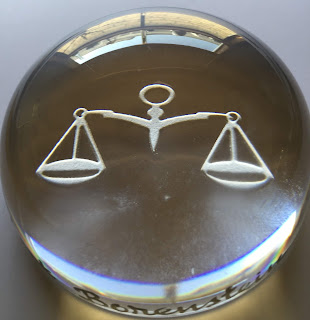 Recently, I read “The Letter,” the 1926 short story by W. Somerset Maugham. I have seen the 1940 movie directed by William Wyler and starring Bette Davis, which adapted the story for the screen. The story had previously been filmed in 1929, starring Jeanne Eagels, the tragic actress who soon died from drug use.

Before that, Maugham had written it as a play. It was a hit in London (starring Gladys Cooper) and Broadway (Katharine Cornell). It has been revived several times. Other film versions have been produced over the years in many languages: French, of course, German, Spanish, Italian, and as late as 1987, in Russian. American and British television networks have aired several productions, dating from the 1950’s.

The story is set in the British colony of Malaya. Howard Joyce is a lawyer. He and his wife are friends with the Crosbies, Robert and Leslie. Robert owns and runs a rubber plantation. His apparently dutiful English wife, Leslie, stays in their home and does needle work while her husband is often away on business.

One night, Leslie shoots and kills a neighbor, Geoff Hammond, who, she says, tried to rape her. He had come to the house, unbidden, apparently drunk, and had suddenly and without warning, molested her. She had grabbed a pistol that her husband had left for her protection from natives, and shot him in self-defense.

The lawyer thinks he has a fairly good case for acquittal of a sympathetic woman. The one element of the crime that he worries about is that she had emptied the chamber, shooting her assailant not once but six times, each one a likely fatal round. Still, her story is coherent and consistent, and so he is confident.

Joyce worries that the number of shots fired diminishes self-defense. The law permits one to use only that amount of force needed to resist bodily harm. Yet, in our time, the law certainly would recognize that the panic of the situation understandably would cause a woman to keep firing the weapon, and that would not weaken the self-defense claim.

A factor in her favor is Hammond’s reputation. Although he had been well liked as an amusing fellow Englishman, he was lately rumored to be living with a Chinese woman. Among the smug tight-knit English community, this was frowned upon, a sign of weak character. It was sure to affect the attitudes of judge, prosecutor and jury. It fit well into Leslie’s explanation that she and her husband had dropped him as a guest and friend when his drinking and behavior became intolerable.

Then, Joyce’s clerk, a young Chinese man, shows Joyce a copy of a letter supposedly written by Leslie Crosbie to Hammond, asking him in emotional and intimate language to come to her house that night. The person who has the original is willing sell it for a great deal of money. Joyce is noncommittal but probes Leslie about it. At first she denies writing any such letter, sticks to her story. But she sees the potential damage, and urges her lawyer to buy it. She suggests that he ask her husband for the money.

Eventually, she admits that the letter is authentic, but she says she only wanted Hammond’s advice about a gun she intended to buy for Robert’s birthday. After the shooting, she had forgotten about it, but then was afraid to admit it because of how it appeared.

Joyce is dubious about this, and has ethical qualms about suppressing evidence. But as his friend’s life is in his hands, he agrees to buy the letter. He tells Robert that he needs the money. Robert at first doesn’t seem to understand the full import, and is so trusting and loving of his wife that he agrees to pay the ransom.

The letter is bought, suppressed and Leslie is acquitted. Robert then reveals that he didn’t believe her fallback story about the gun, especially because that night he had gone out to buy a gun and had run into Hammond and told him about it.

In the end, Leslie confesses that she and Hammond had been lovers for years. They had stolen many hours together, whenever her husband was away, or distracted. Then, about a year ago, Hammond had cooled toward her.

She heard about his living with the Chinese woman. She tolerated it for a while, but he found more excuses not to see Leslie. She became frantic; she wrote the letter begging him to come to her. When he did, he told her that he was ending their affair. He married his Chinese woman and loved her and despised and pitied Leslie. She clutched at him as he left, and he threw her down. She grabbed the gun and shot him in rage. She thought he had burnt this letter, as they each had done so many times before. But his wife had found it and wanted payback.

In the story and play, that is the end. Robert and Leslie go on, perhaps not as before, but they do endure. The 1940 script, written by Howard Koch (who had written the script for Orson Welles’ radio broadcast of “War of The Worlds”) ends with Hollywood production code justice: the Chinese wife (played by exotic looking, but not Asian Gail Sondergard) stabs Leslie in the moonlit garden.

We know from reading the screens of our favorite films and TV shows, that many fictional stories are “based on true events.” This is especially true of stories that involve crimes.

Maugham based “The Letter” on a notorious case he knew about from his travels in Asia. In 1911, a Eurasian woman named Ethel Proudlock was convicted by a judge of murder that was similar to the one in the story. She had emptied a revolver into the body of a man who she claimed had tried to rape her while her husband dined with friends. Apparently Ethel’s testimony was disbelieved and she was sentenced to death, although she was soon pardoned after pleas from her husband and others.

Maugham changed some of the elements for dramatic purpose and others for thematic reasons. Certainly he saw it as an example of the ills of the British colonial system, the hypocrisy of the colonial society, particularly its racism. Leslie is an Englishwoman, not a Eurasian, and the man she shot had violated a social code by marrying out of his race, so she is acquitted of the crime.

The element of the lawyer’s ethical quandary is one that interests me. Joyce is a decent, moral man, who takes his profession seriously. He accepts the burden of defending his client and wants to save her life. When she asks him if he believes her innocence, he hesitates, but gives her the professional answer that I have given many times. It is not his role to judge, but to state the case for the defense in the most favorable light that the evidence permits.

But when he must choose between his ethics and his client’s welfare, he decides to suppress the inculpatory evidence. He does this fully aware that he is violating one of the sacred rules of law and that if discovered, he might forfeit his career and in fact be prosecuted and jailed for his crime. He also knows that he is concealing her guilt from his friend, her gullible and trusting husband. He allows her to convince him that Robert would be destroyed if he knew that she had deceived him. Robert, in his naïve faith in his loving wife and his need for her, gives Joyce evidence of his fragility.

A lawyer is trained to keep secrets. He alone carries the confidences of his clients and of many others. He keeps his own secrets apart from his closest loved ones—to protect them from the secrets that are his burden.

When a lawyer comes upon evidence that might hurt his client, it raises serious problems. The first duty of a defense lawyer is to serve his client’s interests. Anything communicated between client and counsel is privileged, protected from exposure. The societal purpose of this idea is to allow a free exchange of information between the two. If the client thinks the lawyer will disclose incriminating info, he will not disclose it to his lawyer.

The issue becomes complicated with physical evidence. If it is the gun or other “instrumentality” of the crime, the rules prohibit the lawyer from destroying or concealing it. But at the same time, he can’t hurt his client and he can’t become a witness against his client. The ethics opinions grapple with this dilemma, coming up with not wholly satisfactory compromises. The lawyer may refuse possession of the weapon, return it to where it was found. Or he may go to a judge and turn it over, obtaining an order that shields the source of the information from the prosecutor.

In this case, the letter is not an instrumentality of the crime, but it is evidence that incriminates the defendant by inference. It contradicts her story and raises the suspicion of the affair. It can be argued that once the lawyer came into possession of this evidence he had no duty to disclose it without a court order, subpoena, or discovery request. The notion is that the prosecution bears the burden of proof and must do so without the help of the defense. The defendant’s right to not incriminate himself includes his counsel.

But if the evidence was removed from its original location, thus depriving the prosecution the chance to find it, ethics opinions suggest that the lawyer has a duty to put it back where it was found.

What would happen if the lawyer suppressed the letter, and then the victim’s wife turned around and told the prosecutor about it? In the racial atmosphere, they may not have believed her. But they might have demanded the lawyer turn over the letter. Would he compound his crime by denying its
existence? There was also the clerk who brokered the deal. And what of the husband? Would he keep the secret forever?
Posted by Mortimer at 10:05 AM No comments: