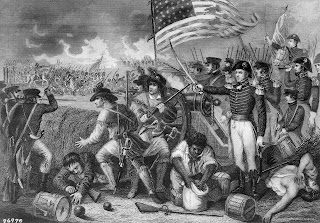 Daniel Walker Howe’s volume in the series called the Oxford History of the United States, is titled, “What Hath God Wrought: The Transformation of America, 1815-1848.”

It begins with a chapter about the Battle of New Orleans, fought in January 1815. Ironically, the battle, which made Andrew Jackson a folk hero and is celebrated in pop songs and movies (Charlton Heston played Jackson on screen), was fought weeks after the Treaty of Ghent had ended the War of 1812. (Of course, neither party knew of this due to lack of instagram.) Because the Americans won a great victory, the footnote was ignored by the folk who craved a hero and a tale to go with him.

Jackson’s fame led to his presidency, which is credited with expanding the idea of democracy to include a broader electorate than the wealthy landowners who dominated the first fifty years of politics in this country.

Like most myths, Jackson’s distorts the truth. First, his military prowess:  most military historians, while giving credit to Jackson’s courage and leadership, ascribe the victory to luck and British mistakes.

In the battle that made him a folk hero, his army largely consisted of native Americans, Creoles, freed blacks, and slaves, all of whom fought with conspicuous courage. The New Orleans he fought for spoke more French and Spanish than English; its citizens included Irish Catholics, Creoles, French speaking Acadians (Cajuns), Chocktaw, and mulattos.

As Howe writes, there were “two battalions of black men, one made up of African Americans and the other of Haitian immigrants. Some of the black soldiers were slaves on loan from their masters to the army, but most of them were free men. Jackson addressed the blacks as ‘brave fellow citizens’ and had promised them pay and respect the equal of whites’.

“With the battle over, Jackson ignored his promise to secure equal rewards for the black men who had stood with him at the barricade. Besides twenty-four dollars cash, each soldier was supposed to receive 160 acres of public land, but forty years later, the black veterans were still trying to get their land claims honored.”

“The slaves among them had been returned to their owners, who were not bound by any promises made.

“On the other hand, Jackson showed solicitude for those masters whose slaves had escaped and taken refuge with the enemy. He repeatedly demanded that the departing British army return them. General Lambert, to his credit, refused and took some two hundred self-emancipated people off to lives of poverty but freedom in Bermuda.”

That is not the only ironic fact related to this incident. The battle mythology from the start and continuing until today involves pride in the American frontier militiaman whose courage and ability with a rifle supposedly defeated the professional British soldiers who were famous in Europe as opponents of Napoleon. (The British army under Wellington’s command would defeat Napoleon at Waterloo later that same year.)

The fable is that Tennesseans and Kentuckians came to aid of Luisianians to rout the redcoats – again, as they had during the Revolution thirty years earlier. The story is taught as proof of the Jeffersonian / Jacksonian ideal of the independent rural yeoman farmer as the backbone of American democracy. The contrary image, the Hamiltonian vision of a central government / industrial cities as the engine of American power, is claimed to be a foreign model, not suited to the American character.

Howe notes, “A popular song of the 1820s, ‘The Hunters of Kentucky,’ extolled the performance of the Kentucky militia at New Orleans despite the fact that Jackson himself had criticized the Kentuckians harshly and never retracted his condemnation. Exploited for political purposes, the song perpetuated the misperception of what had happened.

“The Battle of New Orleans came to be regarded by Jackson’s many admirers as a victory of self-reliant individualists under charismatic leadership. It seemed a triumph of citizen-soldiers over professionals, of the common man over hierarchy, of willpower over rules.”

Howe points out that the facts contradict the legend in this important aspect. In the battle, the Kentucky militiamen failed to affect the outcome. Most in fact arrived late and without any arms at all. “Jackson joked in disgust that it was the first time he’d ever seen a Kentuckian ‘without a gun, a pack of cards, and a jug of whiskey.’”

Howe writes, “The poorly armed Kentuckians had only just reached the position they were expected to defend, and they behaved the way American militia units often behaved in the War of 1812: They ran away. Jackson made plain his fury at them in his official report to Secretary of War James Monroe. ‘The Kentucky reinforcement, in whom so much reliance had been placed, ingloriously fled.’”

Yet, the persistent myth is at least partly responsible for our love of weaponry and the insistence that everyone, at least every white male, is entitled to and ought to be encouraged to own and freely use a gun.

The Second Amendment of the US Constitution, ratified along with nine others, reads:

“A well regulated Militia, being necessary to the security of a free State, the right of the people to keep and bear Arms, shall not be infringed.”

I wonder if Mitch McConnell, the senior senator from Kentucky / majority leader / spokesman for the NRA, tells this story to his constituents.

(Tennessee musketeers behaved better in the battle, but the myth of their superior marksmanship doesn’t stand up to the facts. Their muskets were loaded with buckshot, and in a sharpshooting contest between Tennessee militiamen and New Orleans citizenry, the “Volunteers” finished second.)

In reality, the Battle of New Orleans turned, not on the musket-toting militiamen, but on the artillery that Jackson was able to bring to bear. “A single noteworthy discharge from a thirty-two-pound naval gun crammed with musket balls ‘served to sweep the centre of the attacking force into eternity,’ in the words of a British officer.”

Nonetheless, the public of 1815 was just as gullible and willing to swallow a romantic story as it is today.

“They seldom rejoiced in the multiracial, multiethnic nature of the winning army. Neither did they celebrate the technological know-how that enabled their artillery to perform so well. Instead the public seized upon the notion that western riflemen, untrained but sharp-eyed, had defeated the arrogant British. In fact, primary responsibility for the American victory lay with the artillery, not with the frontier marksmen of legend.

“It also manifested a failure to foresee how much the future of the United States would owe to mechanization and government-sponsored enterprises like the federal armories that made cannons.

“Jackson’s admirers liked to believe theirs was a country where untutored vigor could prevail; to point out that technical expertise mattered seemed undemocratic. Their interpretation of the battle was compatible with Jefferson’s vision of ‘an empire for liberty’ stretching to the west, a belief that the nation’s destiny lay in the multiplication of family farms and the extension of American power across continental space.”

“But where did America’s future lie? With the individualistic, expansionist values exemplified by frontier marksmen? Or with the industrial-technological values exemplified by the artillery? Which would better serve American security and prosperity: the extension of agriculture across the continent or the intensive improvement and diversification of the economy and its infrastructure?”
Posted by Mortimer at 2:08 PM No comments: