Tales from The Great Depression

My father graduated from high school in 1930, possibly the worst year of the century to enter the work force. In fact, he had planned to go to college, but as the oldest of six children he was expected to find work. He found it in the garment industry as his father had.
My mother’s family was poorer. She left high school to work in a slipper factory, earning $8 a week, of which she gave $6 to her mother.
Her mother and aunt had run a succession of

basement Rumanian restaurants. This is not to be confused with a string of restaurants - these were tiny establishments which were abandoned when business failed to make the rents. The first month was usually provided free of rent when Papa Hymie agreed to paint the places himself.
They were married in August, 1934. My father was 22, my mother 18. They must have liked each other in those early days. My brother was born in June, 1935.
My mother claimed that those were happy days. "We didn’t have any money, but it was okay because neither did anyone else."
Jobs were hard to find among their group of friends who were always hunting for work. One was Benny Solinsky (phoenetic spelling). According to my mother, Benny would have been a terrific stand up comic, but for one problem, a tantalizing stutter.
One day Bennie returned from one of his many job searches, slouching with disgust. My mother asked Benny what was wrong.
Benny said, "I-I w-went for a j-job."
"What job?" my mother asked.
"An a–a-announcer at a-a r-radio station."
"Dont tell me. They didn’t hire you."
"N-no, b-b-b-because I’m J-J-J-Jewish."
My mother explained the WPA with this story .
She told me that when my brother was an infant, she used to wheel his baby carriage the couple of blocks from our apartment (on 35th Street near Surf Avenue) to the boardwalk in Coney Island. She’d sit on one of the benches, knitting, rocking the carriage and watching the WPA workers on the beach.
A dump truck parked on the beach next to the work gang, a crew of many men with shovels who filled the truck with sand. The truck then took the tons of sand to the next beach (about a block away) while the workmen followed on foot. The sand was dumped and the men smoothed it out.
After a week, the men marched to the beach where the sand had been dumped, filled the truck with the same sand and returned it to the first beach.
My mother accompanied her telling of the story with giggles, appreciating the irony of the make work government program. She was not one to oppose government waste. She understood and accepted the goal of the New Deal to put people to work, even if the work was silly work.
In fact, the particular project she witnessed was useful. 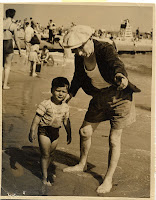 The redistribution of the sand on the beach accompanied the renovation and expansion of the rock breakwaters that divided the beaches. The project was needed to prevent erosion and preserve the beaches for recreation. It was the sandbox of my childhood.
Posted by Mortimer at 7:51 PM