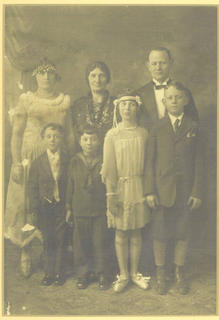 I guess every family has its mysteries. We had a big one. I mean a big family. And to a kid there were a lot of mysteries. For example, my father’s dad was called “Harry” (who lived with “Aunt Ida”); and so was my mom’s brother Harry (whose wife was “Aunt Hanna”), and her father, “Harry” lived with “Aunt Laura,” but she also had a Papa Hymie who lived with “Aunt Ethel.” We had an “Aunt Ida” who sometimes lived with us.
It was complicated. But a kid picks up clues during family gatherings where stories are re-told. Hints about dramas and comedies emerge. Some names you hear whispered with different emotions that a kid has a harder time with, a choked tear. "Sammy" was one of those. He was never at the family gatherings, not one of the pinchers of cheeks. My mother, who was the keeper of family lore, talked most about him, her brother-in-law who “died in the war.”

This phrase stuck with me, a kid raised on TV war movies. We had some snapshots and some “effects” that were all there was of “Sammy.” A Purple Heart, silver wings pin, lieutenant’s bar shoulder pin. A kid’s curiosity about war led to questions and I pieced together a story. 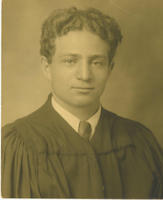 He was the fourth of six kids. Alex (in the suit), Edna (the ballet dancer), Milton and Sam. Two more came later (Alvin and Fran). Milt and Sam wanted to be doctors, "experimented" on unfortunate stray cats in their basement "lab" which included a chemistry kit, with which they also stunk up the neighborhood.

Sam graduated college but World War II interrupted his plans for medical school. He enlisted in the Army Air Corps. He wanted to be a flyer, but was declared too short. With his chemistry degree, he was assigned to the quartermaster corps, the cushiest duty possible. So, of course, when the height limit was lowered because of the increasing need for flyers, he asked to be transferred to flight school.

Lieutenant Samuel Borenstein became a navigator / bombadier on B-24's. He came home on leave and spent time with his girlfriend, Gerry.

He took my brother, then 8 or 9, on the parachute jump in Coney Island, near where we lived. And then he went “overseas” and, in the specific words I remember, “was shot down over the Bay Of Biscay” and was reported “missing in action and presumed dead.” Gerry remained close to our family for several years but eventually drifted away into her own life.

And that was all I knew.

Fifty years later, I found the old photos in a box and got the idea to try the internet. Sent a message in a bottle with the few facts I had from stories and notes on snapshots “Idaho” “Bay of Biscay.” It didn’t take long. A guy named Don Olds, a veteran who was keeper of the flame about such things, answered me with far more than I could have dreamed.

“Received your email pertaining to your uncle Samuel Borenstein. I do have some material covering his last flight 27 Mar 44. I have the MACR (Missing Air Crew Report) from the aircraft he was aboard when shot down. I may have some other papers as well. He was in the 733rd Squadron of the 453rd Bomb Group stationed at Old Buckingham, Norfolk County, England. 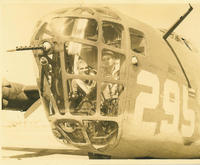 The 453rd did their early training at Gower Field in Idaho. So I’m sure we’re talking about the same man.

“Your uncle was a member of a B-24 named “Cabin In The Sky” which was piloted by Lt. Alvin Lien. On this particular mission the 733rd Sq. Commanding Officer Major Curtis Cofield was the Command Pilot and the plane was hit by flak and broke into flames and went into the Bay of Biscay. Unfortunately there were no survivors.

"The 433rd had four squadrons, 732nd, 733rd, 734th, 735th. Your uncle was designated as Command Navigator for this mission. The plane and crew were from the 735th, and apparently your uncle was assigned to this mission as a ‘one time thing.’ Being this plane was the Lead Plane in the entire group formation of four squadrons speaks well of the confidence Group Headquarters had in his ability to lead. 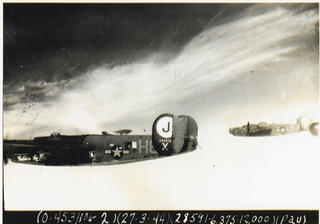 “... I have a good picture of ‘Cabin In The Sky’ in flight on the day it was shot down. It is unusual to have such a view of a plane with the waist gunner clearly visible in the window that would soon be blown out of the sky killing eleven men.”

I was amazed and immediately answered back, requesting copies of the photos. Mr. Olds not only sent me the photos, but also many documents, which shocked me. The “MACR” contains eyewitness statements from other crews. Some saw “eight or nine chutes” open after the plane was hit. Might Sam have escaped? Other reports showed that the Army Air Corps tried to trace the fate of the crew.

On 28 March 1945, the chief of “Casualty Branch” filed a report stating that “... nine parachutes were seen to open ... five, who landed in the water, were picked up immediately, presumably by enemy surface craft. Five other crew members have been reported as KIA.” None of the crew had turned up in POW files.

Then, in 1947, a report from “Headquarters, American Graves Registration Command.” Sam and four others are listed as the “missing” subjects.

“SYNOPSIS OF CASE: The above were part of a crew of 11 men A/C #42-6744, which, on 27 March 1944 participated in a bombing mission to Pau, France. At a point over the Bay of Biscay at coordinates 46° 3' N/01° 29'E the subject plane received extensive flak damage and crashed in flames into the sea approximately five miles from shore. Several parachutes were seen. The enemy recovered remains of S/Sgt. Clinton W. CALDWELL, but after all papers were recovered from his clothes, the remains were interred at sea. The remains of crew members LIEN, WATSON, COFIELD, WARD, KAPLAN and LAYSER washed ashore at places adjacent to La Rochelle, France, and are now interred in the USMC Champigneul. A field investigation conducted for the recovery of the remains of the unaccounted for crew members proved negative. In view of the above and the time that has elapsed since the missing flyers have neither been seen or heard from, it can be concluded that they were lost at sea.”

I received another, final note from Mr. Olds. “I remembered the American Cemetary at Cambridge, England and the fact that your Uncle Samuel is indeed honored there. Enclosed is a list of 453rd men who are buried there. Also, there is a ten foot wall running the length of the cemetery with a small chapel at the end of the wall. Into this wall the names of those whose bodies were never recovered are carved. It is called “Wall Of Missing.” On this list the grave location or WOM notation. Didn’t know if you knew this existed. It is a beautiful place and very serene.”

I showed the results at a family gathering. My mom was tearful, and Aunt Fran was touched. He was the first of her now dead four brothers to have gone away.